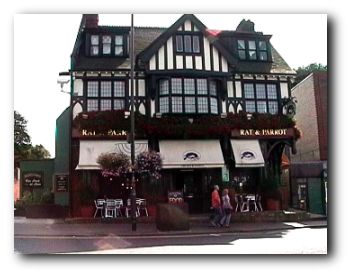 A Guide to Beckenham
and The Three Tuns

The Beckenham Town Centre Residents Association and the Noble House Pub Company are to unveil a celebratory plaque to celebrate and recognise David Bowie's association with their town.

The Beckenham Residents Association, with over two thousand members, aim to recognise the fact that during almost a five year period between 1969 and 1973, he performed and developed his musical talents in the Arts Lab which was held in The Three Tuns pub in the High Street, and that in 1972, he achieved stardom with the birth of Ziggy Stardust, the character developed when he lived in Haddon Hall in Southend Road. Along with the hairstyle that launched Ziggy was cut by local hair stylist Suzi Fussey, who was working in a hair salon in Beckenham High Street.

The date for the unveiling of the plaque on the outside of the Rat & Parrot (formerly The Three Tuns) in Beckenham High Street is Thursday, 6th December 2001 at 12 noon. There will be a party in the pub from about 7.30 pm with David Bowie music.

The unveiling will be by Mary Finnigan, who with David back in 1969 established the Arts Lab concerts on Sunday evenings in the Three Tuns. Others who participated in Arts Lab events in Beckenham with Mary and David have also been invited. At this event, we hope to hear from a Noble House director that the pub will renamed the Three Tuns after refurbishment in the New Year - which will nicely coincide with the celebrations to mark the 30th anniversary of Ziggy Stardust, who was created during David's days in Beckenham.

A video of the day's proceedings is now available for purchase at www.editpoint.co.uk/bowie/ please email video@editpoint.co.uk with any enquiries. 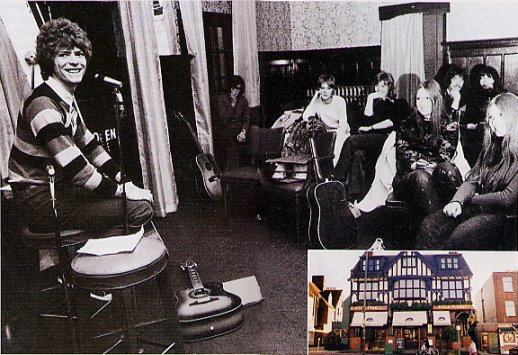 The Arts Lab took place every Sunday evening and after the fourth week, so many people attended that the club had to expand into the conservatory and the garden. On the 25th May, the date of the newly named Arts Lab, Tucker Zimmerman made a guest appearance.

The 'known' dates of David Bowie performances at The Three Tuns are:

Photographs (left to right): Claire Deniz, Tony Hooper,
Dave Cousins and Ron Chesterman of Strawbs
with David Bowie looking on, inside the Victorian bandstand at
Croydon Road Recreational Ground in Beckenham during the
Free Festival on August 16th 1969.

The Rat & Parrot, formerly The Three Tuns pub is another picturesque public house that has been with the town for more than 100 years. This traditional feel public house is now more a modern pub and popular with the young.

Beckenham has a number of train links to London and to the South of Kent (specifically Beckenham Junction, Beckenham Hill, New Beckenham, Clock House and Ravensbourne).

MAP LINK FOR THE THREE TUNS

Click on the 'directions' tab and type in your own postcode and verify... then type in BR3 1AE and verify.

Click 'Get Directions' with a choice of 'shortest', 'quickest' and 'start time' of your journey. You can then print out the results.

A excellent resource of information for the town is www.beckenham.net - check here for various information including:

Accommodation in Beckenham and Bromley.

Bromley Court Hotel - This the biggest hotel in the surrounding area. Located in Bromley, this is a 3 star hotel with restaurant, bar, conference and banqueting rooms. Prices start £85-£100. (The hotel has kindly offered a special discount deal for David Bowie fans visiting the event - ask for details). Tel (020) 8464 5011.
If you're feeling all nostalgic... this is where David played several times with various groups including The Hooker Brothers, The Manish Boys and The Lower Third, in the Bromel Club, which was inside the Court Hotel itself.

If anyone is stuck for a place to stay over whilst you're in Beckenham - Mrs. Smith (wife of Ken Simmons) takes in occasional students or Bed and Breakfast. They have a large room with 3ft bunk beds and a single bed. Charge is £15 per person for bed and continental breakfast. The room can be occupied by 1, 2 or 3 persons who are together. Please ring callsign number 020-8695 9932 if you need a place to stay.